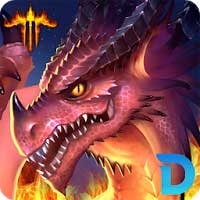 The Monsters are Back! Calling all warriors to lead your nation and defend your precious
kingdom! The dark dragon army is led by four strong bosses, and you need to protect your realm
and tower and defeat the dark magic in this epic battle! The allied warriors have only one choice:
defend, defend, defend. Are you ready?

The new and upgraded Defender III is a tower defense game that empowers players with a huge
variety of magic powers and skills to defend themselves from the great evil. Change scenes from
dark forests to snow mountains and fight evil bosses.