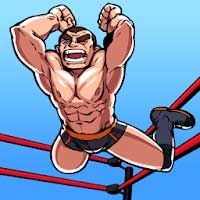 You’ve never played a wrestling game like this before! The controls are simple and fun; they might remind you of pool, marbles, or pinball. Classic wrestling moves and unique combos add exciting tactical and strategic depth. Bounce a monster strike at the exactly the right spot to KO your rival, save your signature move for a massive bodyslam, or bank a shot for a multi-hit combo.

Collect, train, and promote hundreds of wrestlers. Combine the unique stats and abilities of your hyper heroes to build the perfect tag-team for each match and battle it out in extensive single player campaigns or the real-time PvP league.

BUILD YOUR ROSTER
● Collect hundreds of unique wrestlers and build the best tag-team
● Train your wrestlers and unlock signature throws, holds and aerial attacks.
● Manage their wrestling career path from rookie, to jobber, to superstar

EXTENSIVE SINGLE PLAYER CAMPAIGN
● Hundreds of levels to play, filled with unique challenges
● Throw chairs, set the ropes on fire, and jump off the top turnbuckle
● Hit the high scores on the leaderboards

WRESTLING DRAMA
● Hilarious announcer commentary
● Spot a talented rookie when they’re just a little jabroni
● Please the crowd as a babyface, or turn heel
● Make sure to never break kayfabe!