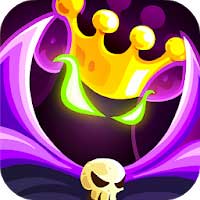 Vez’nan the powerful almighty wizard has returned! Embark on an epic journey as you gather his army and fulfill his devious plans… muahaha. Get ready to show the Kingdom who the real boss is! Fight your way as you conquer the new and the good old realms. Face empires of mighty enemies and clash against supreme bosses in this classic tower defense full of humor and epicness!

– 16 new towers, each with unique abilities and special powers.
– Choose your arsenal of towers and make devastating combinations to stop your enemies!
– 16 challenging stages across three lands ripe for the taking!
– 9 powerful heroes who will follow your command without hesitation.
– Over 35 deadly enemies that will put all of your wit and tactical skills to the test.
– Rush the Kingdom as you bring down 3 mighty Kings in the most legendary of boss fights!
– New powers and reinforcements to vanquish your foes.
– 10+ trinkets and artifacts for that extra edge in battle.
– 30 upgrades to train your army to their best form.
– 50+ Achievements, hidden secrets and fun stuff for you to play and discover!
– No Wi-Fi at your Dark Tower? No worries, just play offline!

NEW UPDATE! The Winter Queen has been freed from her ice prison and it’s ready to unleash a frozen Nightmare on the kingdom. Help Vez’nan to defeat her.