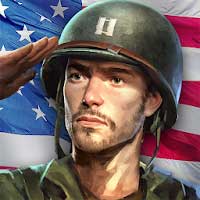 【Commander and Conquer】
Provide famous historical generals of state all over the world with different attributes and special skills like Klaus, Kuchler, Goring, Guderian and so on…Hire and take advantage of your generals to win this WW2 strategy games.

【Tactical Sandbox & Strategy Simulator】
The map system is entirely redesigned which supports seamless zooming and the territory and borders of each ally nation is shown clearly. Besides using strategy to conquer the dictator enemies, you can also purchase special armored units and troops in shops, hire generals and build armys of your own. And every army has its own distinguishing features, command them efficiently and be invincible.

【Open Ending】
Finish battles then open and conquer more famous battlefields. Every army can gain battle experience and when they become elite forces, their battle effectiveness will be greatly improved. World pattern changes over time. Everyone can rewrite history and command powerful armys, making history in this WW2 strategy games!

【Please Note That】
If you uninstall the game, you will lose all game data.

Connect with us! Stay up to date by connecting via:
Facebook: https://www.facebook.com/Strategy-CommanderWW2-Community-343526342834960/

Make your own history！

✪【NEW】The Allies
✪【FIX】The Axis
✪【NEW】Add new troops and new generals
✪【FIX】Improve performance
✪【FIX】Other minor bug fix
✪ Special thanks to the guys who help us a lot in this version. Thanks to Mr. Hale for providing translation assistance.

Take command of the Axis to conquer Europe – then command the armies of the Allies to retake it.History depends on you!

✪Don’t forget give 5 star to encourage us, more update on the way!